bread and olives with a Berber family

From left, Khina Boujnoui and her daughter, Fatima, share a moment of affection outside the family’s home in Tamda, Morocco. The women are part of a traditional Berber family that has been weaving for generations.

A few weeks before leaving for Morocco, I was photographing an assignment on the Cape and commented on the beautiful and unusual shoes my subject, Nathalie, was wearing. “They’re traditional Moroccan shoes,” she informed me. I told her I was leaving for Morocco soon. “You should visit this Berber family I know there,” she said. The indigenous ethnic group of Morocco, Berbers are traditionally nomadic and are known for their tapestries called “kilims”. “Four generations of weavers!” she said. “They’re wonderful. I’m sure they will welcome you.”

10 days into our trip, Mark and I found ourselves snaking our way into the Atlas Mountains up precarious roads with sheer drops just feet away. We were looking for the small town of Azilal where we’d arranged to connect with our Berber hosts, Fatima and Latifa.

Neither of us knew what to expect–showing up on this family’s doorstep, hoping to make some kind of human connection despite a significant language barrier–but I reminded myself of Nathalie’s enthusiasm and her words “I’m sure they will welcome you”. Within minutes of meeting Latifa and her mother, Fatima, I immediately understood why Nathalie had sent us to them.

That afternoon we went to the extended family’s home in Tamda where they have lived and weaved for generations. The family greeted us warmly and offered us mint tea, freshly baked bread, olives and some kind of delicious and mysterious Moroccan sweet. It struck me how pared down their world was. No computers, television, ipods, cars or any of the other trappings of our modern lives. Their world seemed much as it might have been hundreds of years before.

With her school English, Latifa acted as translator and by the time we left from Azilal the next morning, we’d had a Berber language lesson, a mehndi session (during which Latifa painted beautiful floral designs on my arms with henna and wrote, “makayene mauchkile”–translated as “no problem”–on Marks’ arm). We also shared a feast of lamb couscous eaten out of a large communal bowl which Fatima spent hours preparing.

While our time with the family was brief, it was perhaps the most genuine human connection we had with Moroccans on our trip. Throughout our trip, people constantly approached us to buy their wares or services and it was wonderful to spend time with this family without any expectation of financial exchange. In fact, when we asked if they sold their rugs and tapestries (thinking they might want us to buy one), they said no, they were for their own use. After we left, I thought about my observation of Nathalie’s shoes and how this small exchange had led to to such a rich experience.

The photos you’ll see below focus primarily on Fatima’s grandmother, Khina, the matriarch of the family and give just a small glimpse into her world. She lives surrounded by her extended family and the sheep whose wool they use to weave. Her warmth both towards us and with her family members really struck me and I hope these photos capture something of it and the world we were lucky enough to get a glimpse of.

Matriarch of the family, Khina Boujnoui continues to weave despite her age.

Khina picks up a kettle to make mint tea. In the foreground are the family’s sheep whose wool is used for weaving.

Khina looks up at her daughter and granddaughter after weaving on a communal loom. 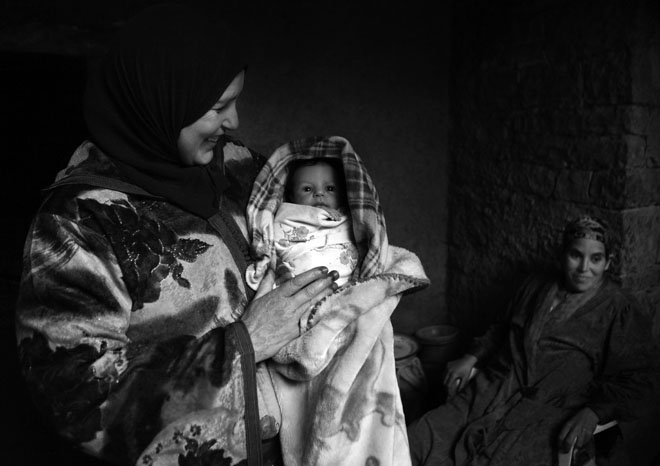 Fatima holds her very young nephew in her family’s home in Tamda, Morocco. Right is her sister-in-law (the mother) who lives with her extended family in the home.

Fatima says goodbye to her family members outside their home before she and her daughter, Latifa, leave for their apartment in Azilal.

← camels, sand and the seamless Sahara
the art of losing →

One Comment on “bread and olives with a Berber family”