camels, sand and the seamless Sahara 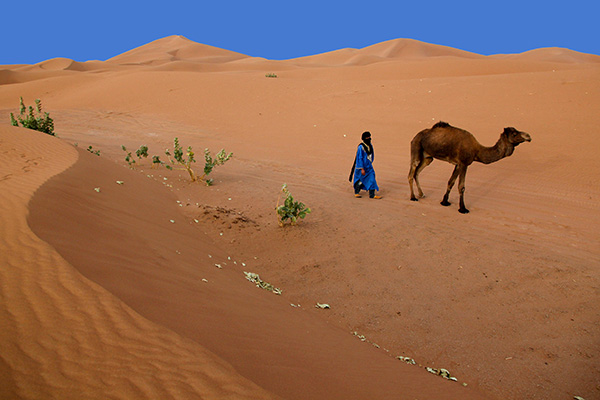 A’arib nomad guide, Hassan Kachti, proud owner of three camels, leads one of his camels out to graze in the Chegaga dunes in the Sahara desert in Morocco. Sometimes he will have to walk as far as 20 km to find his camels at the end of the day. “That’s not far for us,” says Kachtii.

The Sahara desert has always been a mythical place in my mind. Mysterious, romantic, intriguing, the backdrop to one of my favorite books, The Little Prince by Antoine de Saint-Exupery. It’s a place so storied, part of me doubted its existence in modern times. And yet here we were, in the Sahara with our nomad guide, Brahim, and the most seamless and beautiful landscape of sand and dunes one could imagine. The dunes are not only a visual feast but are so soft, one can run up and jump into them and feel as if one is landing in the silkiest of pillow piles.

And then of course, there are lots of camels. I learned quite a bit about camels during our few days. I spent some time photographing them early one morning before their owner, Hassan, led them out into the desert to graze for the day. I discovered they regurgitate their food and chew it…sideways with long, protruding teeth. They are very uncomfortable to ride (maybe because they move both legs on one side of their body at the same time) and don’t smell good. They also have beautiful long eye-lashes (a double row) and can smell water from 30km away!

I don’t know if it was the expansiveness of the desert or the quiet but we seemed to share a lot of thoughtful conversation as well as moments of great hilarity with Brahim and his brothers and cousins. By the time we left, we had Brahim hooked on scrabble and they had us playing a nomad strategy game using camel poop as pieces. I was a little skeptical at first but Hassan, proud owner of three camels, insisted is was “very clean and good”. At night, Brahim’s brothers and cousins played nomadic music on guitar, drums and glass tea cups and sang songs that have been passed down through the centuries.

We left the desert with sand in our eyes, hair and ears and the Sahara’s mystery still intact. Below are some of the images from our time there. 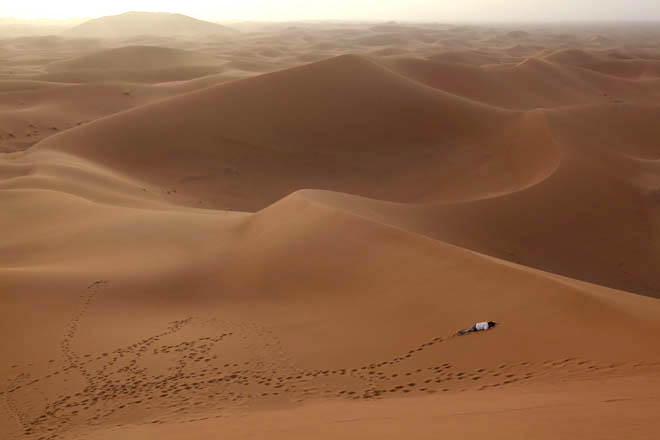 A fellow visitor to the Sahara collapses, exhausted after jumping into the dunes and walking up them numerous times. 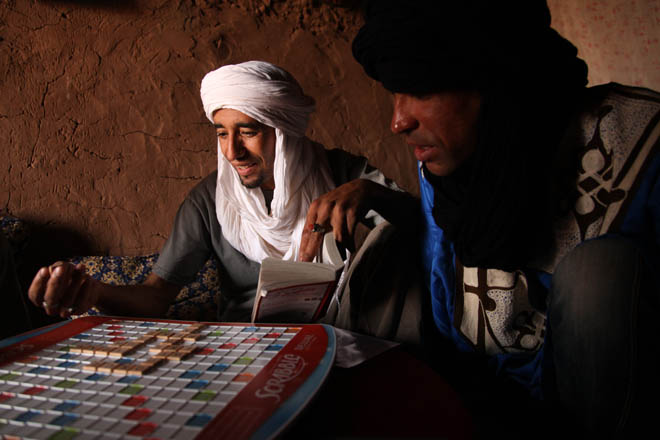 Our nomad guide, Brahim Tfil, plays a scrabble move in one of the camp shelters in the Erg Chegaga region of the Sahara. Right is his cousin, Hassan Kachti. Later, Brahim and his brothers and cousins had Mark and I playing a nomad strategy game using camel poop as pieces. 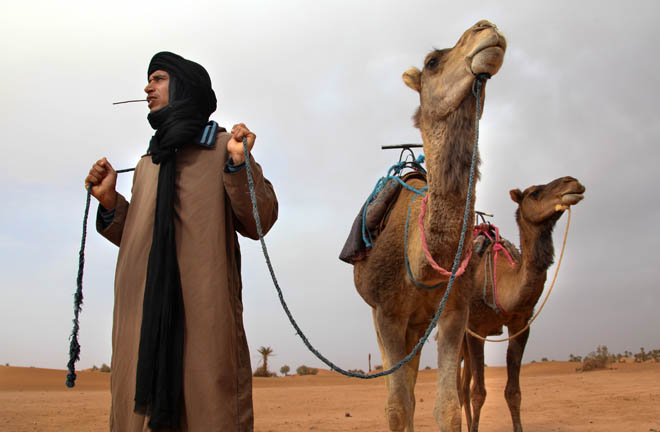 Nordin Banna chews on a stick while looking out at the desert near the small town of M’Hamid. M’Hamid is the last town in the Draa Valley before reaching the Sahara. 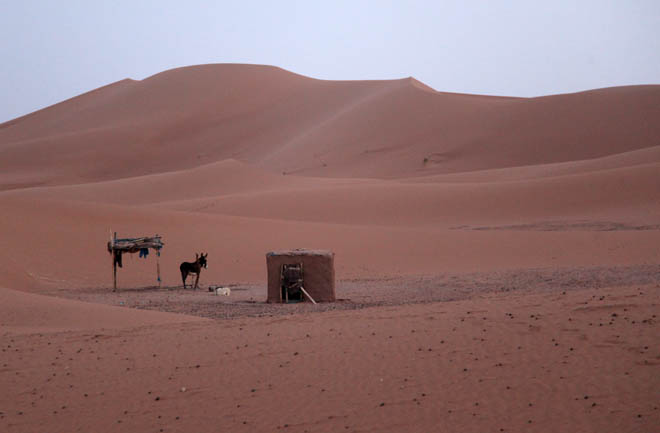 A lone donkey is dwarfed by the massive dunes of the Erg Chegaga in the Sahara desert. 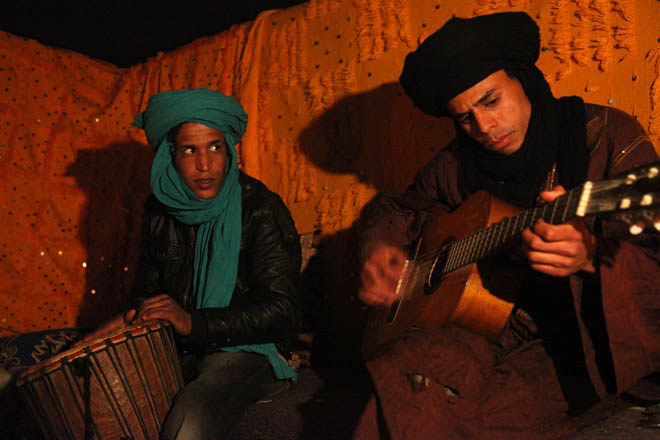 Two of Brahim’s cousins play music late one night. The accompanying songs are nomadic songs passed down through the centuries. “We all play music and sing,” says Brahim. It’s just what we do to entertain ourselves in the desert,” he adds. 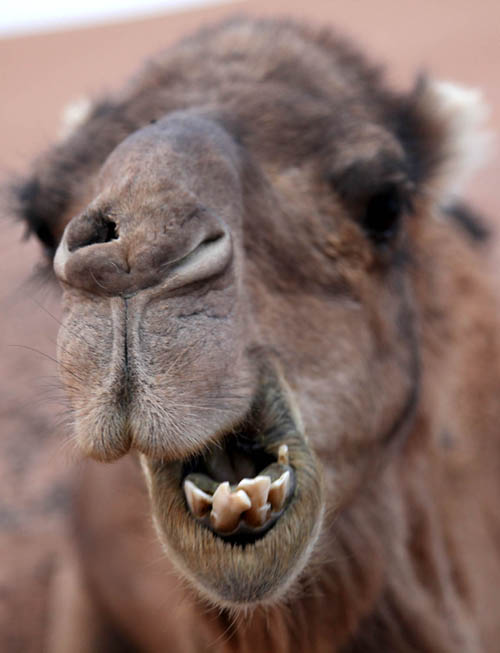 A camel chews its food sideways after regurgitating it. 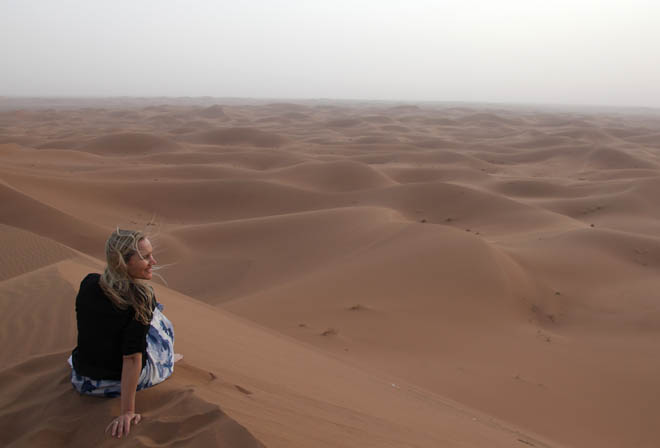 Sitting at the top of the highest dunes, the view of the Erg Chegaga is magnificent (and very windy). 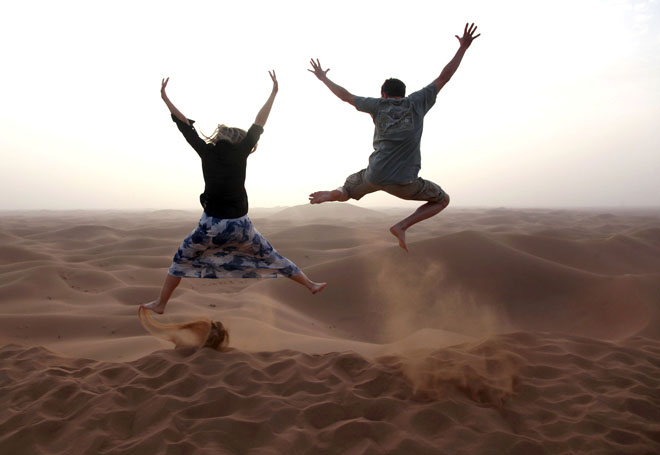 A joyous moment–jumping into the silky, soft dunes of the Sahara.

3 Comments on “camels, sand and the seamless Sahara”