Before arriving in Casablanca, Morocco a few days ago, I was told most visitors get out of the city as quickly as possible. It’s true the city is gritty, chaotic and full of dinged-up cars that hold evidence of Casablanca’s seemingly lawless roads but then, off in the distance, at the edge of the Atlantic ocean …there’s the Grand Mosque.

Despite our hotel receptionist’s insistence that it was definitely too far for us to walk and probably already closed, Mark and I walked the few miles through Casablanca’s afternoon rush hour in hopes of catching the mosque during the “golden hour” before sunset. As we got closer, we saw a ghostly minaret rising up, back-lit and shrouded in fog. I found myself walking faster and faster, anxious to get to what looked like something extraordinary from a distance before the light was gone.

When we finally reached it, the mosque was even more enormous and otherworldly than I had imagined it would be. I knew it would be big because I had read that around 105,000 people could worship there at one time and that it was the 7th largest mosque in the world (with the tallest minaret), but I had not imagined that the grounds of it would serve as more than just a place of worship.

Families and friends gathered in small clusters, seemingly to talk or have an evening picnic while their children chased one another or raced around on scooters. A teenaged couple sat shyly next to one another in the garden area while another couple laughed over photos on their cell phone. An old man even sold white and pink-colored popcorn at the far end of the mosque, which we watched a small boy dump on the ground in an attempt to lure some pigeons over to chase. The ploy was a failure and the boy’s father seemed unimpressed. Everywhere there were arches, beautiful mosaics, stone and marble floors and columns.

It struck me that the mosque served as the sort of “Central Park” of Casablanca, providing a beautiful space to connect and relax, fall in love or just people-watch. We stayed until the very last bit of natural light was gone and watched it change colors and moods. As I was editing my photos, I noticed that the color palettes of my images were so varied despite the fact that they were shot relatively close together in time. I was aware, as I was photographing, that everywhere I turned, I was seeing new light and colors. The fog was heavy, then lifted, then seemed to return as the sun set and the light reflected off the buildings, the ocean and the multiple surfaces in such a variety of ways. It was exhilarating. Below are a few of my photographs. 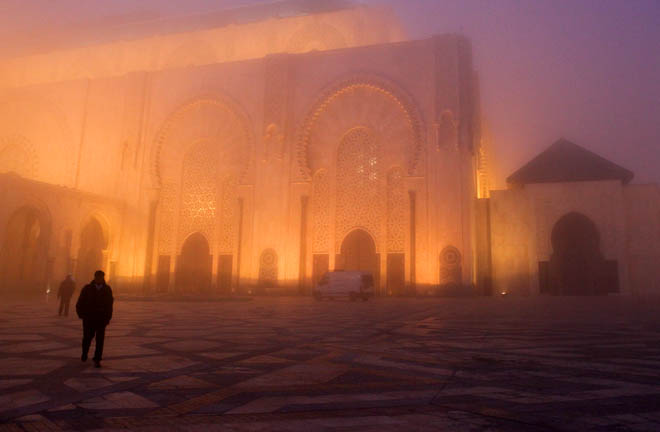