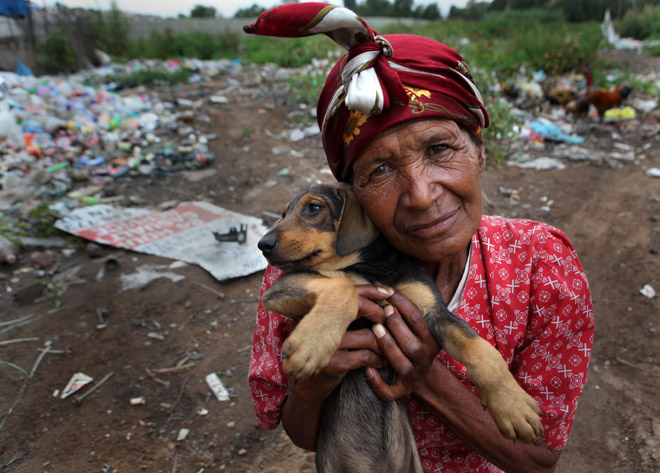 A woman is photographed with her puppy in Randfontein Refuse Center on the outskirts of Johannesburg, South Africa, where she, like many others, live in small shanties and survive off the refuse brought in every day. Residents sort and sell recyclable items and live off what edible food they can find thrown out by others. There is one faucet for the entire area and no electricity or plumbing at all.

My previous post was called “Paradise Found?” and was about the absolutely exquisite beach area of Nungwi, Zanzibar. In stark contrast, I’ve spent the past few days going into some of the most impoverished shantytowns and townships on the outskirts of Johannesburg, South Africa. I grew up in Johannesburg during the apartheid era and so this brief trip has been both powerful and painful in so many ways. I really feel as if I’ve spent a few days in a war zone and even Zanzibar’s country villages–where there is still no electricity and running water–look well-off (and safe) by comparison. Ironically, after all these years and much to my surprise, I feel as connected here as ever.

I’m documenting an organization called CLAW (Community Led Animal Welfare) that provides medical services for the surrounding townships’ animals (dogs, cats, pigs, goats etc.) Because the areas they live in are so poor and crime-ridden, they would otherwise have no access to veterinarians so CLAW shows up on specific days for “clinics” and local residents come flocking to them with their sick, injured or dying animals. They bring them in wheelbarrows and boxes or pull them on carts.

Despite poverty, people here value their dogs…primarily for the protection they provide them in a country with one of the worst murder rates in the world, but also as pets. While the program focuses on treating animals, people come to Cora Bailey (who runs CLAW) and her team for every problem imagine. In the past two days, I’ve heard such a wide variety of intense stories. For instance, at the end of the day today, we went to the Randfontein Refuse Center where many people live in small shanties and survive off the refuse brought in every day. They sort and sell recyclable items and live off what edible food they can find thrown out by others. There is one faucet for the entire area and no electricity or plumbing at all. The shanties are all made from materials found in the trash.

As it was getting dark, a rainstorm was brewing and we rushed back to the CLAW vehicle to avoid getting soaked. A small group of girls–perhaps 10 or 11 years old–approached Cora (all the children in that shanty town call her “Auntie Cora”) and said they needed to talk to her about something. They proceeded to tell her a man in the town had raped one of the girls and had threatened to rape the others.

I found this moment so touching and painful–these incredibly vulnerable girls who have no voice or access to protection approaching the one person who they see as having some kind of power to help them. Cora has been spending time in the townships since before apartheid ended and unlike most white South Africans, has become deeply involved in the issues many of the residents struggle with.

When we left the refuse center, we drove past a mine dump–a fixture of Johannesburg’s landscape–and a large pool of water left over from the frequent summer rainstorms. The stormy light was so lovely and a rainbow appeared in the distance over the water which, mixed with the red African dirt, was almost blood-like. It was simply beautiful and Cora stopped to let me photograph the scene. We had seen so much ugliness and suffering during the day what we saw offered a welcome natural beauty I think we both quietly appreciated in that moment.