Lions, Leopards and other Wild Longings 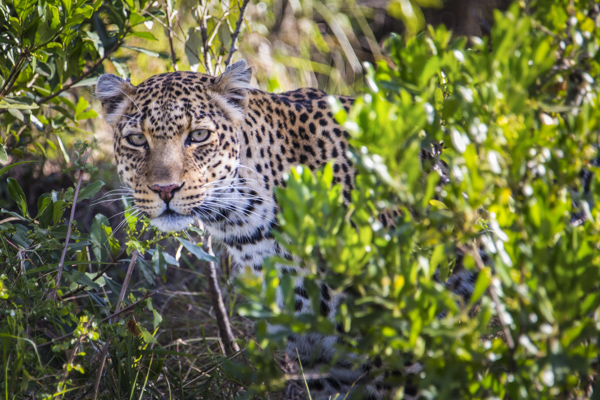 A leopard peeks through the trees in the Masai Mara National Park in Kenya. This extraordinary close encounter was just one of many moments in my life that has fueled my passion for being in the wilderness and for capturing a world that remains as mysterious and beautiful to me as ever.

“Nature has been for me, for as long as I remember, a source of solace, inspiration, adventure, and delight; a home, a teacher, a companion.”— Lorraine Anderson

Having spent my childhood in South Africa, I began an early love affair with the wilderness. Some of my most vivid memories are of lying awake at night listening to the roar of lions accompanied by a string quartet of cicadas, imagining the secret nighttime rituals happening outside in the dark.

While I grew up in Johannesburg, during our summer holidays my family would pack up our rusty old landrover and head somewhere wild–Kruger Park, Lapalala, Swaziland, Zimbabwe–and no matter how long we stayed, I never tired of seeing wildlife. I loved knowing that wildlife existed independently of our human world and had its own mysterious rhythms and complex relationships.[su_spacer]
Although I left South Africa many years ago, I have found myself drawn back to Africa over and over again as a photographer. This January, I found myself in Kenya for various projects including photographing an elephant conservation project for the International Fund for Animal Welfare (IFAW) and spent time in the Masai Mara, Amboseli and Tsavo National Parks. I again found myself mesmerized by everything about the experience–the low rumbling elephants make to communicate with each other over many miles, the tall flat acacia trees silhouetted against the sunset, the high-pitched sound of zebras braying, the extraordinary site of a leopard lazing in a tree after a meal. I tried to capture as much of the wonder of it as I could….to share with others and to last me till my next visit.  Below are some of my favorite moments.[su_spacer] 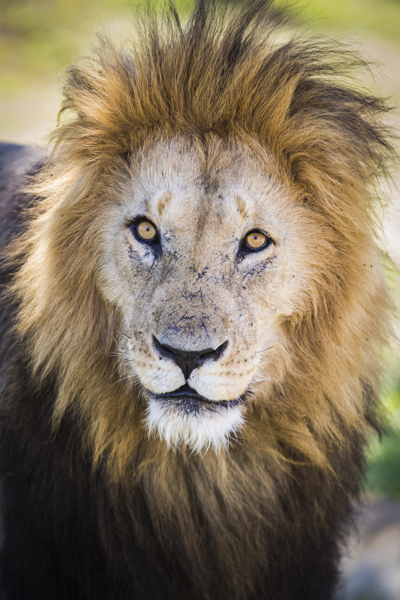 A beautiful male lion I photographed in the Masai Mara. In the wild, males seldom live longer than 10 to 14 years as injuries sustained from continual fighting with rival males greatly reduce their longevity. Although this lion is relatively young, one can already see the scarring on his face from the various fights he has had. 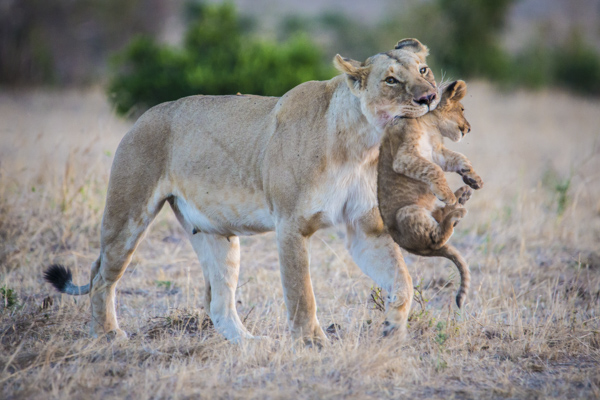 A lioness carries her two month-old cub back to safety after it wandered a little too far from her.

A two month-old lion cub looks up at two lionesses. Lionesses raise their cubs communally and cubs suckle indiscriminately from any lactating female.

A lioness feeds on a freshly-killed zebra carcass. Lionesses are the hunters in the pride and co-ordinate with each other to surround their prey and stalk them before sprinting in a short burst, finally killing them by strangulation. They then share the weight of the kill on the journey back to the group where all the lions eat. 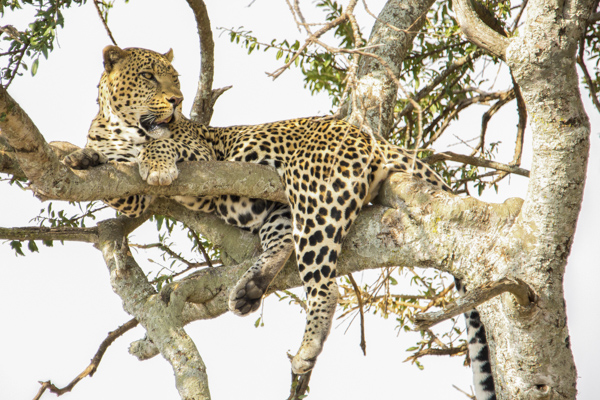 A leopard relaxes in a tree after eating part of a kill which he hung on a nearby branch. Leopards store their kills in trees to prevent other predators from stealing them.

Elephant calves share a playful moment using their trunks in Amboselli National Park. At first, baby elephants don’t really know what to do with their trunks. They swing them to and fro and sometimes even step on them. They will suck their trunk just as a baby would suck its thumb. By about 6 to 8 months, they begin learning to use their trunk to eat and drink. By the time they are a year old, they can control their trunks relatively well.

An elephant grazes in Amboseli National Park in Kenya. Elephants are extremely intelligent animals and have memories that span many years. It is this memory that serves matriarchs well during dry seasons when they need to guide their herds, sometimes for tens of miles, to watering holes that they remember from the past. They also display signs of grief, joy, anger and play. 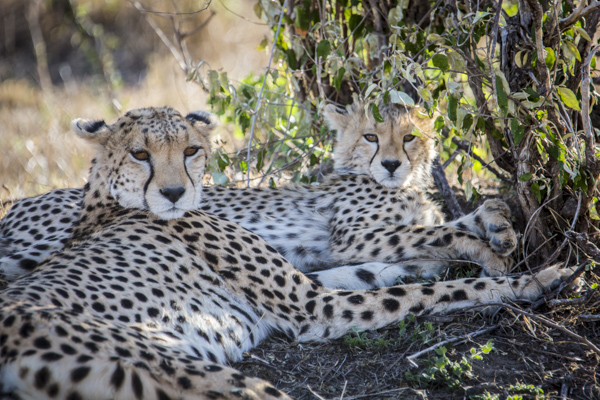 A cheetah mother and her cub relax under a tree during the heat of the day. On average, a female cheetah will give birth to three young at once but even under a mother’s watch, 90 percent of cubs die before they are three months old. Considered the world’s fastest land mammal, a sprinting cheetah can reach up to 64 mph. 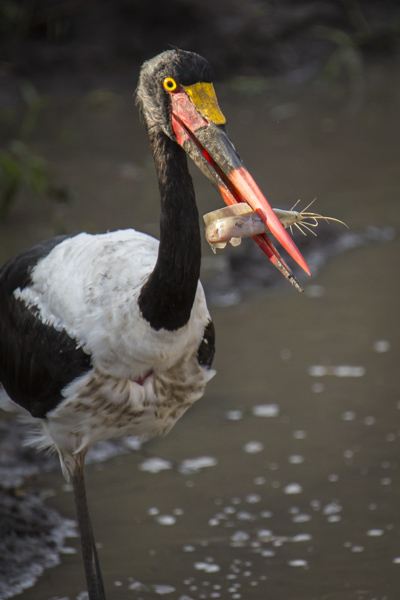 A saddle-billed stork holds a fish it caught in the Masai Mara.

A lilac-breasted roller perches on a stick from where it can spot insects, lizards, scorpions, snails, small birds and rodents moving about at ground level. 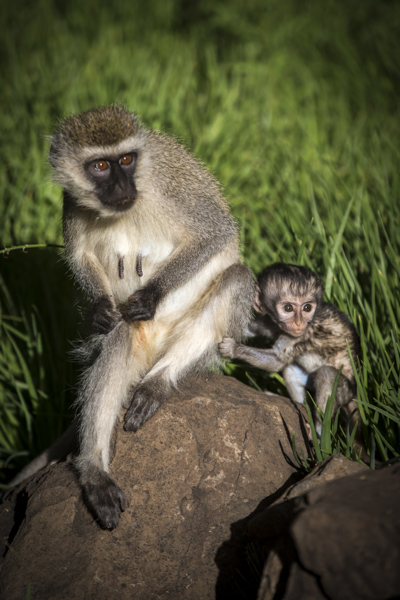 A vervet monkey and her few day-old infant warm up in the morning sun in Amboseli National Park. In groups of vervet monkeys, infants receive a tremendous amount of attention. Days after an infant is born, every member of the group will inspect the infant at least once by touching or sniffing. 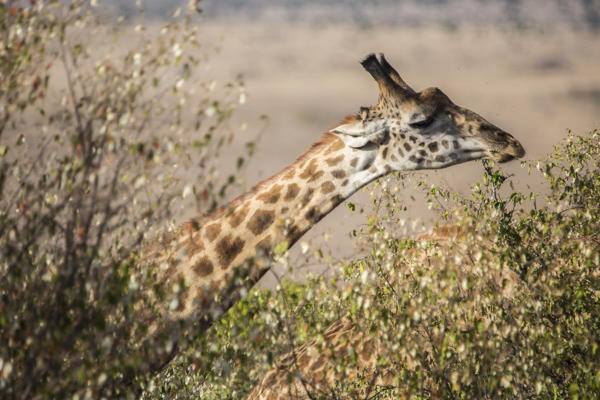 A masai giraffe grazes on a tree in the Masai Mara. Masai Giraffes mainly feed off whistling-thorn acacia trees, using their long lips and tongues to reach between the thorns to extract the leaves.

A secretary bird is photographed in Amboseli National Park. Like most birds, secretary birds spend their lives in monogamous pairs. During courtship, they soar high in the air with undulating flight patterns and call out to each other with guttural croaking. Males and females can also perform a grounded display by chasing each other with their wings up and back, much like the way they chase prey.

A zebra suckles her foal in Amboseli National Park. Baby zebras can begin running about one hour after they are born.

Adult spotted hyenas and their week-old cubs are photographed near their den in the Masai Mara. Besides flesh, hyenas eat skin, bones, and even animal droppings. Surprisingly, hyenas are not related to dogs even though they look similar and have similar greeting ceremonies. 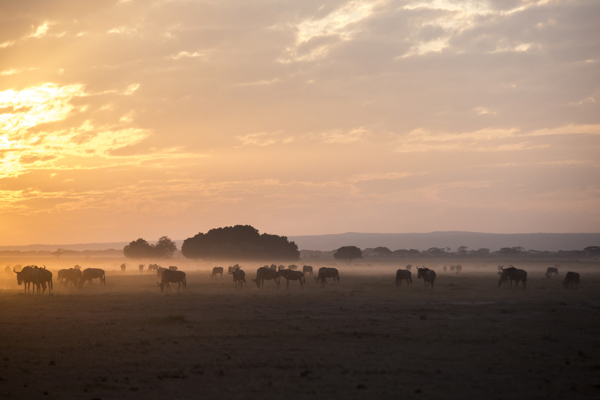 Wildebeests are silhouetted against the setting sun in Amboseli National Park.

My blog–Apertures and Anecdotes–strives to be an interesting place of discovery–a place to share beautiful photos, discover new places and people and lose oneself in this extraordinary medium. If you or someone you know would like to receive new blog posts directly through your email, please sign up directly on my blog site–Apertures and Anecdotes (in the right hand column)–or email me at julia@juliacumesphoto.com. Thank you!

ps. comments are closed due to an overabundance of spam but please feel free to respond to this blog post directly if you have any questions or comments.

Photographing in the Masai Mara.

← Images from Another World: The Samburu Women’s Photography Workshop
Mujeres de la Habana: an intimate look at the lives of modern Cuban women →