Yesterday around 30 dolphins stranded along the shores of Cape Cod Bay from Dennis to Wellfleet. While strandings happen all the time on Cape Cod, particularly in the winter months, what made this one different was the sheer numbers and how spread out the dolphins were geographically. While no one really knows why the dolphins stranded, the previous day’s intense 30mph winds were suspected of having played a role.

The International Fund for Animal Welfare (IFAW), the organization that called me about the story, was immediately overwhelmed with the logistics of rescuing dolphins up and down the shore line and transporting them about 45 minutes away to Scussett Bach in Sagamore Beach where the waters were calmer and the dolphins could potentially be released. IFAW also needed to evaluate each dolphin medically, gather scientific data on the dolphins and tag some of them before releasing them back into Cape Cod waters. To add yet another challenge, the temperatures were frigid and the winds made things worse. As a team of IFAW and New England Aquarium employees worked with volunteers to handle the situation, IFAW’s stranding coordinator, Brian Sharp, kept fielding more and more calls reporting new strandings. To say the least, it was a chaotic and tragic unfolding of events and while some good came out of it–11 dolphins were successfully released back into the bay–there was a palpable sense of loss as, at the end of the day, the 35 or so humans who had put a huge effort into saving the dolphins, walked away to their various vehicles to head home.

As a photojournalist, I was taught to keep a certain emotional distance from my subject matter. “Never get too close to lose objectivity,” is the mantra. Photographing in a rescue vehicle with a bunch of traumatized dolphins struggling and snorting in distress made this quite challenging. Perhaps humans have a particularly strong sense of empathy towards dolphins because their communication is so complex and they are known to be extremely intelligent. Or perhaps we’ve fallen in love with their physical grace and freedom. I found it incredibly difficult to watch the dolphins suffering in this painful state–many were injured and bleeding–but almost all communicated their pain audibly which made it seem all the more difficult. I started thinking about whether the strong empathy I felt for them would affect my ability to document the day’s unfolding. I was still able to photograph and gather information and still felt an urgency to tell the story–perhaps even more so because of my feelings about the animals.

I think that many photojournalists choose their profession because they care about stuff…people, injustice, animals, exploitation and all the other things that are part of the human experience. While I understand that getting over-invested in one’s subject matter can be dangerous and cause one to create reality rather than capture it, I ultimately believe that true objectivity might render a photojournalist uninspired and incapable of doing his/her job. Images that move me are usually full of the passion and vision of someone who does care, who empathizes with his or her subject matter. As I left Scusset beach yesterday, cold and exhausted, I did not regret my feelings. I knew that this story, like many I’ve worked on, made me feel profoundly human and that this was not a bad thing. Below are some images from the story.

A rescued common dolphin is given a hearing test before being released back into Cape Cod Bay at Scusset Beach.

A mother and calf common dolphin are transported to the beach by a team from the International Fund for Animal Welfare (IFAW) and the New England Aquarium. 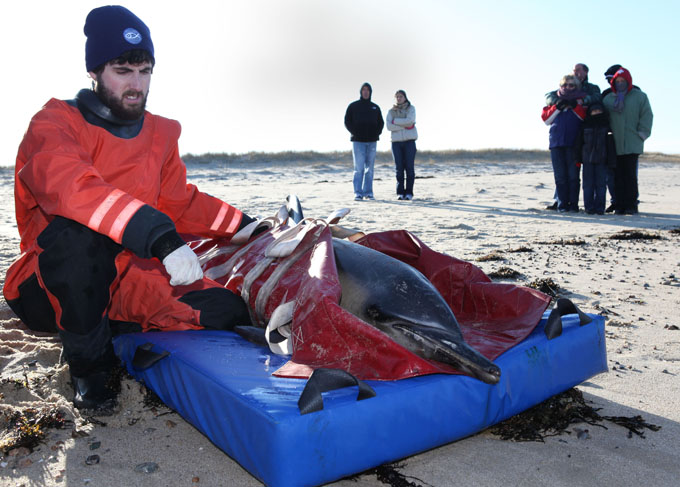 New England Aquarium biologist, Eric Payne, sits with a rescued common dolphin minutes before it is released back into Cape Cod Bay.

A team from the International Fund for Animal Welfare (IFAW) and the New England Aquarium struggles against the surf while releasing two rescued common dolphins into Cape Cod Bay at Scusset Beach.

Director of the International Fund for Animal Welfare’s Emeregecy Relief Program, Ian Robinson, watches as a common dolphin swims off after being released.